Sometimes miracles do happen.
La Brûleuse de Terre, a piece I imagined in 2016 is now floating on velvety water in Nympsfield, in what will soon open as an elephant sanctuary, we are just waiting for those elephants (yes, we are talking about the UK) to find their way here.
The making process has been both tortuous and serendipitous in such a way that it feels more appropriate to call it a journey.
Enlarging a piece while retaining a fundamental man made quality, and then making it float with its base just under the surface of water, is one of the greatest exercises in suspension of disbelief.
When I did the first maquette of the Brûleuse, in lead, all I knew was that, to balance the fiery nature of the piece, some sort of watery element was going to be needed.
I had never created anything bigger than me (and actually, thinking from the point of view of a mother, I found this concept almost against nature), so when the Quenington Sculpture biennial, Fresh Air, awarded me the bursary to enlarge the piece, I had to face a big taboo of mine.
I have always respected artists who get their hands dirty and create works that have a timeless quality, in that their work appears as if it could have been made nowadays as well as in the past, or why not, in the future. I tend to look for that “no strings attached” quality, where the artifice is so invisible that the viewer’s eye stops wondering how the piece has been achieved and starts believing that, in fact, it has always existed.
When my trusty technical assistant, a youthful and wise octogenarian engineer neighbour of ours, suggested to use aluminium sheets and water jet power cutting, I felt like a cave man who is suddenly asked to wear a space suit. Supported by the skill, enthusiasm and patience of a number of people, many more times I had to let go, and place my trust in machinery, including a crane lorry and a couple of bollards when even the strongest lads in Gloucestershire were unable to twist the metal sheets.
Looking back on the 6 years it took for the Brûleuse to be finally complete – a gestation period even longer than an elephant’s – it strikes me how, in every salient moment of the process, I was surrounded by dogs and children. In the final stage, one of these, when things were looking rather unpromising, decided to evoke the super powers of her magic lizard to get us out of the woods. And it worked!
I am now wondering what the elephants will think of the piece.
They’ll probably have a go at the red ball first, then they’ll scratch their shoulders on the metal sheets, try and uproot the whole thing and finally come to the conclusion that it’s just another unnecessary contraption – one of the many we all need to live with – and eventually forget about it. 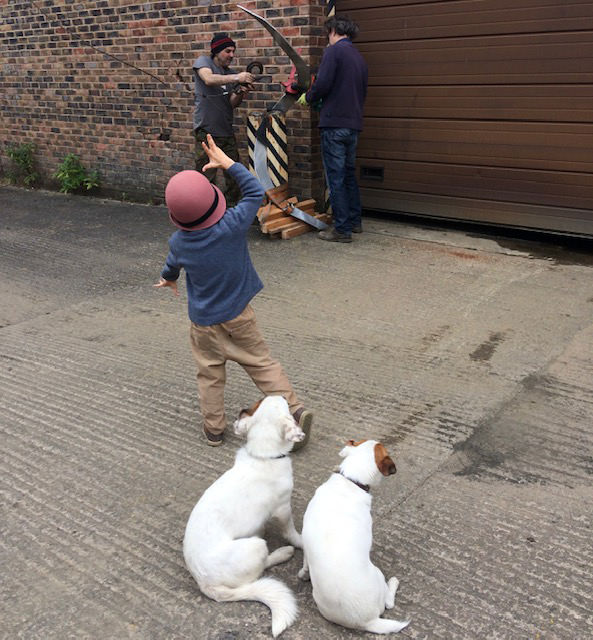 Back
Scroll to top